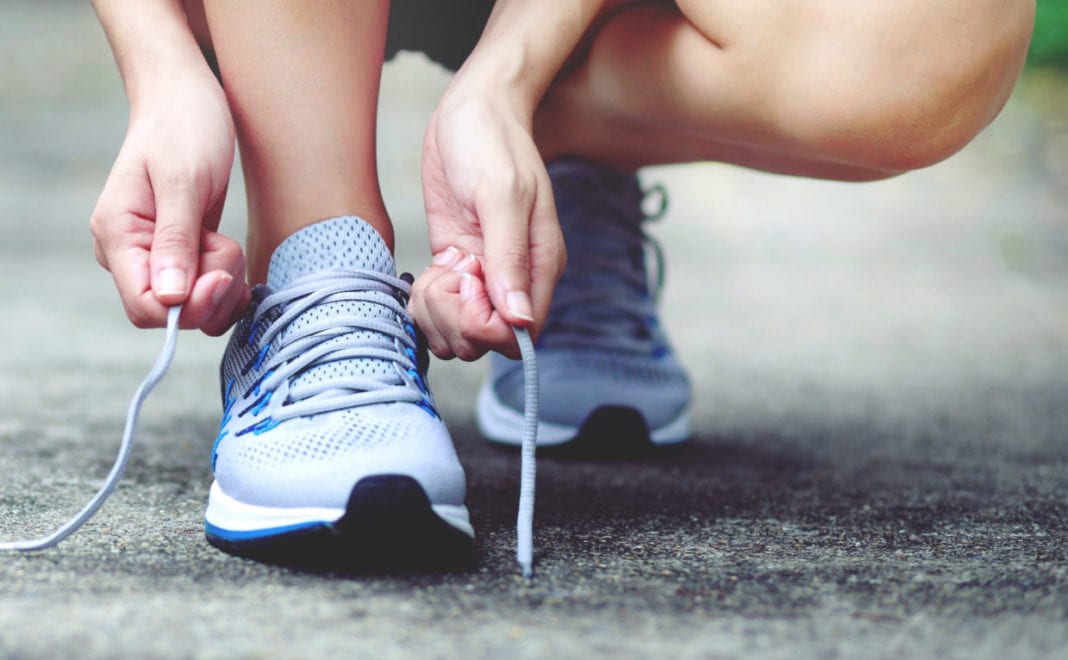 Many of us are spending more time at home – which probably means less time at the gym. But that doesn’t mean you can’t get in a great workout, says Holly Andersen, a personal trainer and group exercise instructor with the YMCA of Greater Oklahoma City.

“There are many effective workouts like tabata and HIIT (high intensity interval training) that can be done from the comfort of your home,” she says. “These types of workouts can also be body weight only exercises, and can be just as effective as using weights and will raise your metabolism and heart rate in no time.”

Since the pandemic, Andersen has seen a decrease in attendance in group exercise classes and an increase in personal training clients. Many YMCA members are also taking advantage of online classes.

Before beginning any new workout, talk to your physician, says John Jackson, a personal trainer and the owner of Impact Fitness in Tulsa.

“You don’t have to be in a gym setting to get fit and stay fit, but it’s important to check in with your doctor to make sure you’re healthy and ready to start a new fitness routine,” he says.

Whether you’re working out with a group, a trainer or virtually, Jackson says it’s best to start with a clear direction.

“In my profession, we talk about resting heart rate and active heart rate, and discuss how to challenge your body without overdoing it,” he says. “It’s all about finding the right balance to help you exercise safely and meet your health and fitness goals.”

To help keep you motivated at home, Andersen says it’s best to set a routine.

“Working out on the same days and time is a must,” she says. “Stay consistent and make exercise a priority. Exercise has many benefits, and now more than ever, those benefits are critical to physical and mental health.”

Also, don’t be afraid to get outside, even when it’s chilly.

“You can always jog or do a brisk walk in the cold,” says Andersen. “To enhance a normal jog or walk, add some interval training. For example, you can jog at a moderate pace for one minute, then sprint or increase speed for 30 seconds. Or look for a marker, like a stop sign. Jog until you get to the stop sign, then stop and do 20 squats or push-ups. This will increase your endurance and make the normal jog or walk less boring, and you will warm up in no time.”

Our immune system is extremely complex and consists of two parts working together, says Catherine Mims, a physician and an assistant professor for the departments of internal medicine and pediatrics at the University of Oklahoma Health Sciences Center.

Two vitamins that gain a lot of attention during cold and flu season – and now during COVID-19 – are vitamin D and C.

“Vitamin D activates the immune system against infection and has been shown in some studies to improve the body’s ability to fight respiratory infections, like the common cold in particular,” says Mims. “Vitamin C supports our innate immune system on many levels, including helping our epithelial barriers as well as our immune cells to prevent infection.”

While vitamin C deficiency has been associated with a high susceptibility to infections, Mims says in most studies, it has not been shown to prevent respiratory illnesses, despite its known benefits to the immune system.

“Additionally, Vitamin C has not been shown to be effective at treating respiratory infections and has required very high doses to show any benefit in most studies,” says Mims. “There are side effects with high dose vitamin C; therefore, it is not routinely recommended to treat common illnesses. Maintaining a good level of Vitamin C in your blood daily is more important than trying to take it once you have a cold.”

Rachel Franklin, a family medicine physician with OU Health, says to think of your immune system like an army fighting an enemy.

“There are sentries always on the lookout; if the sentry sees something it knows to be an enemy, it alerts the killer cells to surround and imprison or destroy the enemy,” says Franklin. “This is why vaccination is so important; vaccines give the sentries a look at the enemy before it attacks. Your army also has alarm systems for when the enemy attacks without the sentry recognizing it as an enemy. Part of what has made COVID so terrible is because the army doesn’t exactly know what it’s fighting. It overreacts, creating collateral damage in healthy tissue. This is why people have suffered heart and kidney failure from COVID, just as it looked like they were getting over the respiratory symptoms.”

Mims says the most effective ways to prevent common illnesses such as colds, influenza or even COVID-19, is to support the innate immune system by frequent hand washing, wearing a mask and avoiding close contact with others.

“The best way to support the adaptive immune system is to get your annual flu shot and the COVID vaccine, when available,” says Mims. “These are simple but effective measures at decreasing exposure and improving response to common illnesses.”

3. The Power of Zzzs

Are you getting enough sleep? Of the sleep you do get, how much is restful and undisturbed? The time we spend asleep can be just as important to our overall health as the time we spend awake.

Richard Bregman, a sleep specialist physician with the Saint Francis Health System Sleep Disorders Center, says adults between the ages of 18 and 64 should sleep between seven and nine hours a night, while adults ages 65 years and older should sleep seven to eight hours a night.

“That represents quantity of sleep, but quality of sleep is just as important,” says Bregman. “Associated with sleep deprivation, either by hours of sleep or quality of sleep, are many health problems including cognitive decline, hypertension, stroke, myocardial infarction, chronic fatigue, decreased libido, fibromyalgia, diabetes mellitus, depression and automobile accidents.”

According to the National Highway Traffic Safety Administration (NHTSA), drowsy driving plays a part in at least 100,000 motor-vehicle crashes and more than 1,500 deaths per year.

Common sleep disorders that cause poor quantity or quality of sleep include insomnia, where a person has difficulty initiating or maintaining sleep, and sleep apnea syndrome, characterized by abnormal breathing during sleep which causes fragmented periods of rest.

Bregman says all the above risk factors can be secondary to sleep apnea, as well as cardiac arrhythmias such as atrial fibrillation and reduced heart function. In addition, hormonal changes that occur with sleep deprivation and sleep apnea can lead to obesity. However, successful treatments are available, and Bregman encourages anyone suffering from sleep issues to seek professional help.

With the new year comes resolutions – and typically near the top of the list is getting healthier or more fit. But staying the course can be challenging. To reach future goals, start with examining the past, says Kathryn Reilly, a family and sports medicine physician with OU Health in Oklahoma City.

She says this can help identify personal strengths as well as roadblocks that may hinder success – and then make plans on how to avoid these setbacks. Before beginning a new exercise, she says to visualize the time, place and frequency and set reasonable goals for weekly weight loss.

“Research shows that it takes several weeks for a new habit to develop,” says Reilly. “For exercising, it gets easier after six to eight weeks.”

While maintaining momentum can be difficult, Reilly offers a few tips to stay focused.

“Sharing your goal with someone close to you can be helpful, both for accountability and for support when enthusiasm wanes,” she says. “Many people benefit from investing in the change they want to make by joining Weight Watchers, hiring a personal trainer, doing Noom or another web-based program. Having a partner makes it easier to show up, if only to avoid letting the other person down.”

Additional motivation can include a reward (preferably not food-related) for achieving specific goals along the way. This could be a fun trip, a new outfit or other enjoyable activity. Reilly also shares the reminder that if your goals are related to health issues, be sure to discuss any changes with your physician, as they can offer a variety of information and support.

1. Mental and Emotional Stress during COVID-19

As pandemic precautions continue to affect everyone’s daily lives, many are feeling overwhelmed and fatigued by it all. The effort to adjust to new work environments, navigate social distancing and cope with lifestyle changes is causing mental and emotional strain.

To help manage stress, you should be open to your emotions, both good and bad, says Rebecca Brumm, director of operations within the eating disorders program at Laureate Psychiatric Clinic and Hospital, who is also a licensed professional counselor and certified eating disorder specialist.

“Pushing challenging emotions away or judging yourself for feeling them only intensify them,” says Brumm. “It’s normal and natural to feel the full continuum of emotions every day. Allow feelings to come and go like waves. Try to be an objective observer about your thoughts, and notice how judging them increases suffering and intensity.”

Brumm also recommends an exercise in finding your inner wisdom by taking a sheet of paper and making two columns. Label one side ‘fear’ and the other side ‘wise mind statements.’

“Write out pain- or fear-producing statements under the ‘fear’ column, and write your response in the other column as if you are addressing a dear friend, child or loved one,” says Brumm. “Examples include, ‘The world is not safe,’ answered with, ‘The world has never been safe, but it is safer than you feel right now.’ Another example is ‘I could lose my job. I’d lose my house, savings, etc.’ A wise mind statement could be, ‘That could always happen, but you also have many resources, talent, resourcefulness and family support.’ Many people find that addressing and answering their fears this way can provide relief. Of course, a mental health professional is always available to help you work through difficult emotions.”

Pets (And Their People)

Head for an Adventure