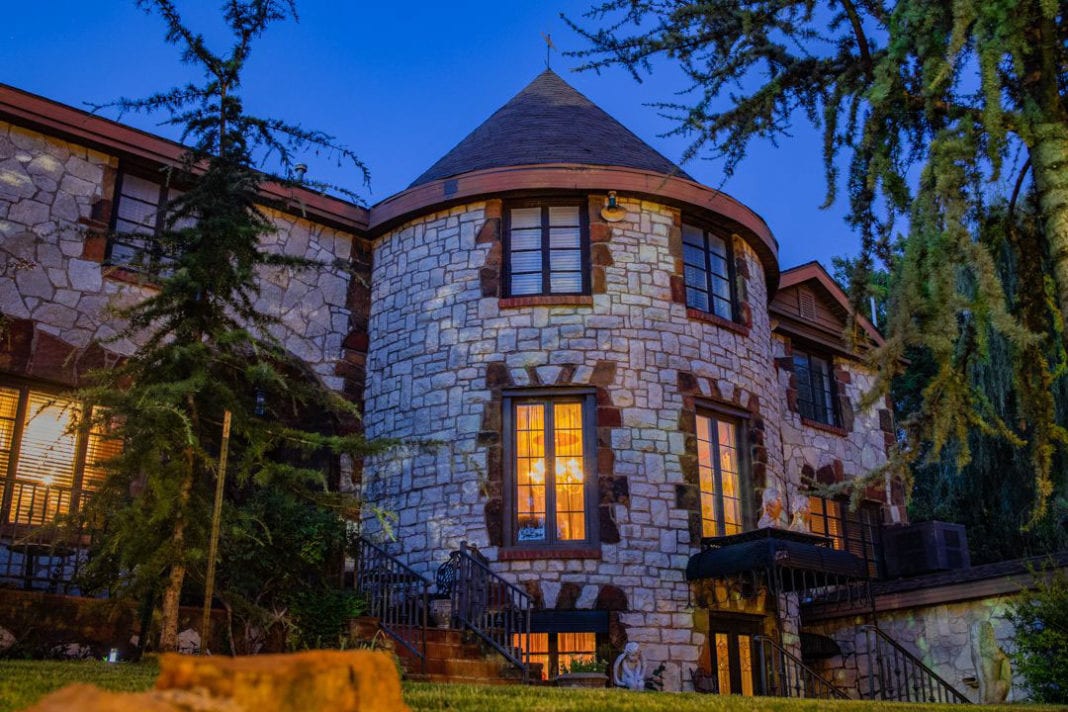 Bill Blecha became infatuated with a medieval castle while in France, serving in the U.S. Army aviation initiative during World War I. He vowed that when he returned home, he would build a replica in Oklahoma.

After the war, Blecha became a manager for Manhattan Construction Co. during the 1920s and  ’30s urban renewal of downtown Oklahoma City. With duties involving demolition and disposal, he accessed a plethora of architectural pieces and squirreled them away so he could one day build his dream home.

Blecha, an accomplished carpenter, married Opal, a seamstress specializing in wedding dresses, coats and hats. Together with their daughter Willia Dee, they could make – or do – pretty much anything. And in 1945, they began constructing the 5,500-square-foot castle, doing most of the work themselves. In 1950, their home was complete.

Engulfed by OKC, the three-level castle oversees five acres just north of I-40. Except for the 24” thick concrete walls, almost all of the castle had a former life … including a prehistoric mammoth tooth embedded in a fireplace.

The citadel is essentially a museum dedicated to OKC’s past. Many of the doorknobs are marked with “C.C.,” Charles Colcord’s initials. (Colcord was the developer for the Colcord Hotel, completed in 1910 and listed on the National Register of Historic Places.) A Veazey Drug hutch; Oklahoma County Courthouse wood railings; the Capitol Hill High School gym floor; rounded glass storefront pieces; and OKC Downtown Airpark pieces are all woven into the castle’s eclectic tapestry.

Born in 1895 in Oklahoma Territory, Blecha’s life is a testament to the past. During the 19th century, his parents emigrated from the Austro-Hungarian Empire’s Czech or Bohemian region – and their OKC land became the Czechoslovakian National Cemetery at 2437 S.W. 44th St. A math whiz, Blecha was a Miller Brothers 101 Ranch paymaster, and apparently performed in Hollywood movies – probably linked to the ranch’s Bison Film Company. He also mined for gold in Costa Rica. A picture of Bill’s brother Tony still hangs in Yukon’s Czech Hall, because Tony played his accordion as part of the band that played the first polka dance when the hall opened. Blecha’s relatives now saturate Canadian County and sprawl across the U.S.

The dwelling’s third owners, Amy and Ralph Rollins, embarked on extensive restorations in 2004. They morphed the landscape into luscious gardens and built a huge medieval event venue – the Grande Hall. Renaming the location “Castle Falls,” they masterminded all three castle levels into unique dining experiences.

As part of OKC’s dynamic core, Castle Falls has nabbed over a dozen awards, one being inclusion in Diner’s Choice Award’s “100 Most Romantic Restaurants” for three consecutive years. An evolving piece of historical art, Castle Falls has witnessed innumerable marriage proposals and hosted hundreds of weddings and other celebrations. Free castle tours are available.

Change in the Air

Preparing for the Future

Heading to The Half