Claremore’s Will Rogers Boulevard encapsulates the evolution and stasis of one of Oklahoma’s oldest towns.

The street’s east end features revitalized shops, but Dot’s Cafe has anchored downtown for nearly 60 years. The west end has Rogers State University and its growing programs, but also the Will Rogers Memorial Museum, dedicated in 1938.

One could argue that putting on a new face while retaining an established aura has existed since French traders came upon this Osage village, founded in 1802.

“Thirty-five years ago, there was just a two-lane road to Pryor, there was no Veterans Center, there was no four-year university and it was a long-distance call to Tulsa,” says Stratton Taylor, longtime state Senate president pro tempore from Claremore. “That’s all changed. We’re the sixth most-populated county in the state and we’re due for another growth spurt.

“The great thing about Claremore is that you have a lot of people who’ve lived here all their lives, but you don’t have to have been born here to do well. There’s not an old-school group that will shut you out.”

Oops
Known as Clairmont or Clermont (variant French for mountain with a clear view), Claremore became official when a town clerk misspelled the name on a document establishing the post office in 1882.

Not Will
The city is the seat
of Rogers County, named for Clem Rogers, father of Oklahoma’s favorite son.

Panorama
The Will Rogers Memorial Museum overlooks the city on 20 acres where Rogers planned to retire before his untimely death in 1935.

Lynn Riggs
Claremore playwright whose Green Grow the Lilacs is the basis for the 1943 musical Oklahoma! 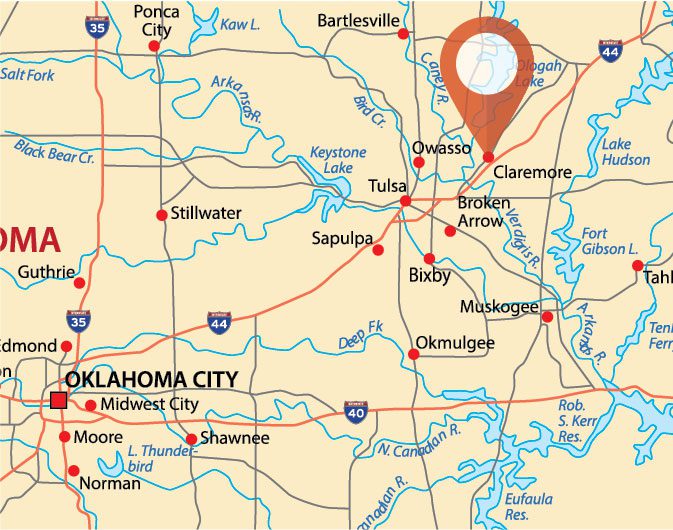 “We wanted in on the deal,” Taylor says. “There were 300,000 of us living in Northeast Oklahoma outside of Tulsa and we didn’t have access to a four-year public university. The rest of the state thought that Oklahoma had too many colleges and universities. That sounded great if you already had one, like Alva, Goodwell and Ada.”

Taylor says RSU spurred much of the growth that has made Claremore an ideal compromise between country and urban living.

“It’s not a suburb and it’s not a dying rural community,” he says. “We’re 30 minutes from downtown Tulsa and there’s always something going on with plays, speakers and seminars. But I can still walk into the Hammett House and know just about everyone there.”

“The thing about small-town colleges is really enjoying the simple things, like walking on a nature trail or hanging out at a hole-in-the-wall restaurant,” she says.

Typical of the growth is J. Farley’s, which opened last month. This Americanized Irish pub is named for Claremore fire Capt. Jason Farley, who died during a water rescue in 2015. Chris Hayes, Farley’s fire department colleague, partners with friend James Franklin in the venture.

“This is a great way to keep Jason’s legacy alive,” Hayes says.

Traditions abound, too, such as Will Rogers Days, Nov. 2-5, which annually celebrates the Nov. 4 birthday of Oklahoma’s favorite son. Activities can be found at willrogers.com and moreclaremore.com

Legacy of an Outlaw

A Place of Circumstance