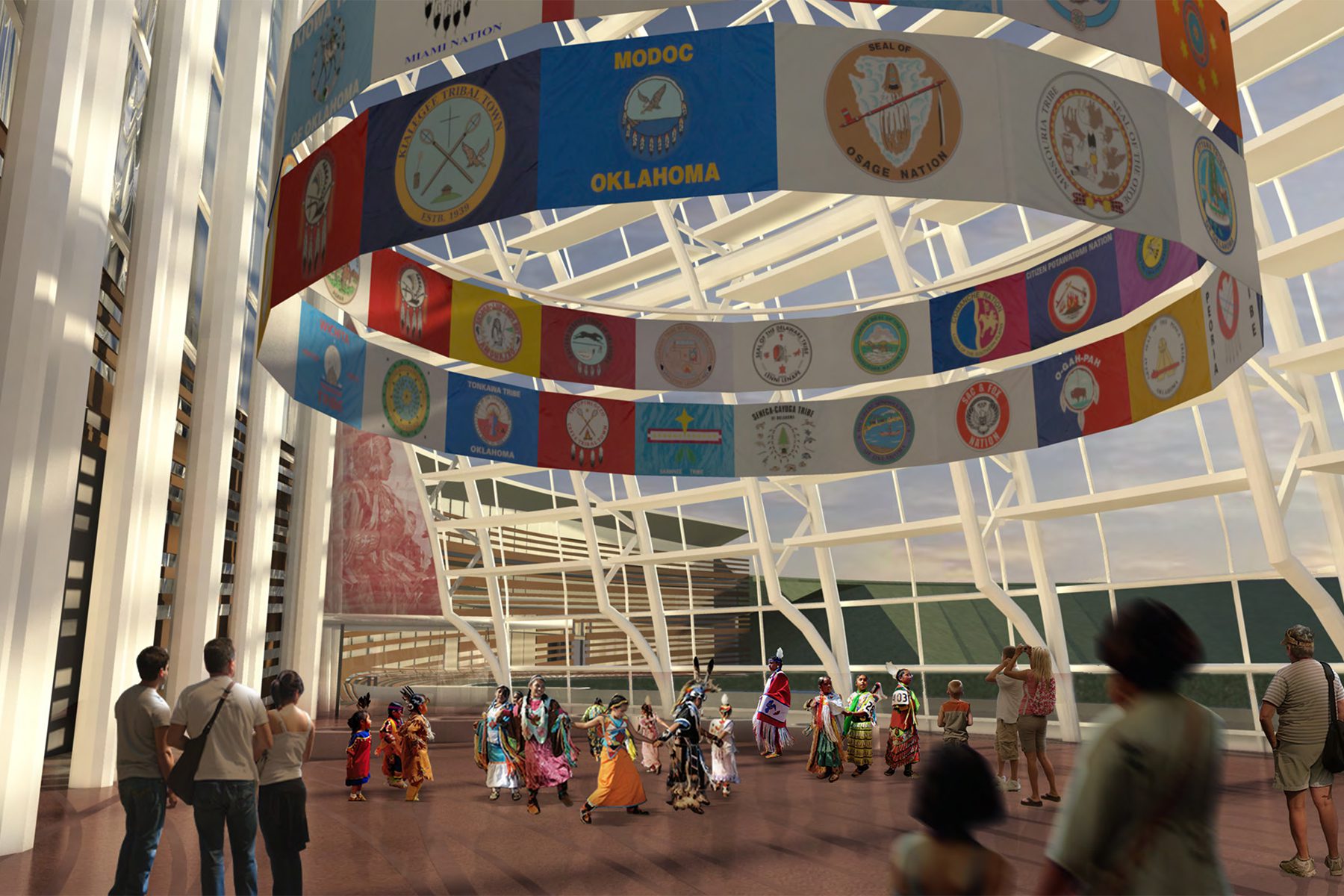 The long-awaited First Americans Museum has a story to tell to the world, and the visitor experience is vital to the mission.

But the museum will also honor the cultures of the 39 tribes based in Oklahoma, with features not so easily recognized by non-Natives.

“The entire project was designed to align with the cardinal directions, so the special times of equinox and solstice could be commemorated and honored,” says Ginny Underwood, marketing and communications director for this new cultural gem, scheduled to open Sept. 18 in Oklahoma City.

The entire museum was designed meticulously, with reverence and education in mind.

“The Remembrance Gate faces east, as culturally many of our tribes do in ceremonial and social gatherings,” says Underwood, a member of the Comanche Nation. “The Hall of the People, the large glass dome you can see from I-40, is the main staging area, a prominent structure that represents a Wichita grass lodge.”

Senior curator Heather Ahtone, who is Chickasaw and Choctaw and leads an all-Native curatorial team, says each tribe was consulted for the exhibitions.

“The tribes have been phenomenal,” she says. “We worked in partnership, not just using them as consultants or advisors.”

The Trail of Tears, along with all the other heartbreaking journeys that forced Indigenous people to what was then Indian Territory, are marked by the Remembrance Gate, says Shoshana Wasserman, the deputy director of FAM.

The gate “gives us a moment to pause and remember all those who perished along the way,” and to celebrate those who survived, says Wasserman, who is from the Thlopthlocco Tribal Town of the Muscogee (Creek) Nation.

“The museum focuses on the five tribes that have always inhabited this place, and all of the other tribes that had homelands all over the United States,” she says. “Everyone can hear from a firsthand perspective our view of history.”

Two primary exhibits will greet visitors on opening day of the 175,000-square-feet museum. In the Tribal Nations Gallery, a media-rich experience highlights tribal origin stories and culture, including sports and games, humor, and the role of warriors. More than 140 objects on loan from the Smithsonian’s National Museum of the American Indian make up the exhibit in the Mezzanine Gallery, representing the material culture of all 39 tribal nations in Oklahoma.

Museum amenities include a restaurant and an express café with Native cuisine, and a museum store that features handmade works by Native artists.

Visitors can walk to the top of an earthen mound that pays tribute to the mound-builder civilizations dating back to about 500 A.D. The walk represents life, and the peak of the mound is symbolic of the arduous journeys of triumph and tragedy experienced during the removal to Indian Territory, according to the FAM website (famok.org).

The museum is designed “to give people the opportunity to, through our eyes, perhaps broaden their perspectives,” says Wasserman.

Admission for the museum will be $5 and by timed ticket only, says Underwood. Programming will include fashion shows, Native music and films, and a keynote address by U.S. Poet Laureate Joy Harjo, who is from Tulsa.

On-site parking will not be available during opening weekend, but shuttle service will be offered from five parking lots across the metro, with a $5 charge to park and ride. More information will be available on the website as the opening approaches.

After opening weekend, admission will be $15 for adults and $10 for students 13 and older, tribal members, seniors and members of the military. Children three and under are free, and admission is $5 for youth ages four to 12.

A Legacy of Excellence

A History of Hauntings