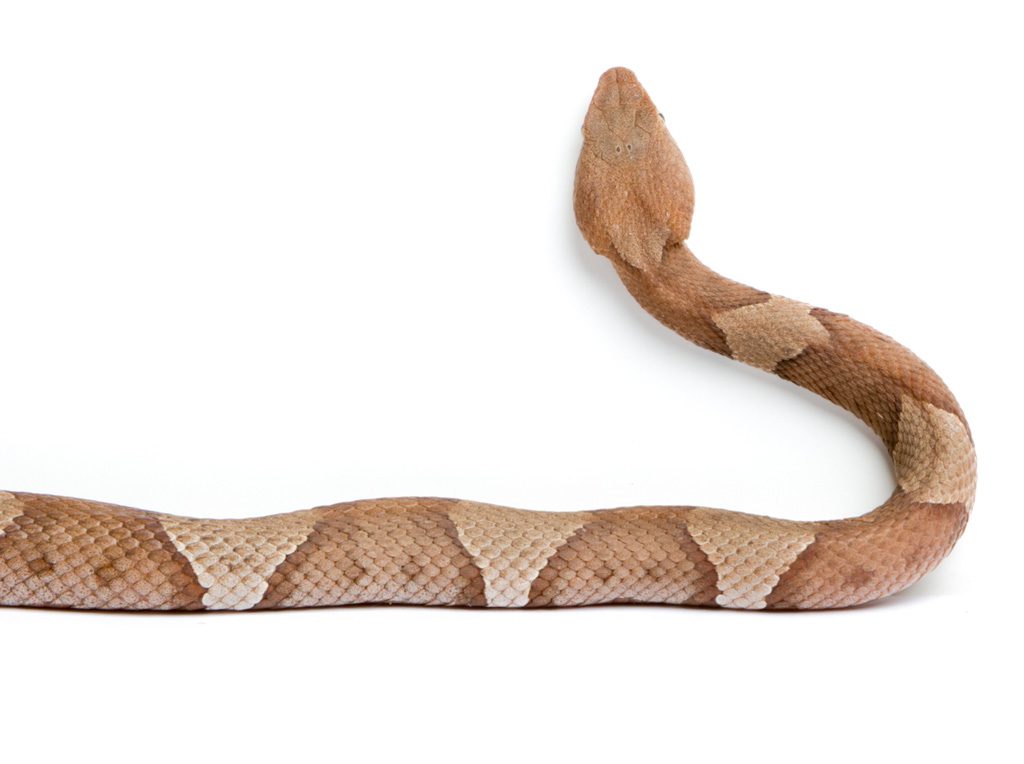 Even a snake lover like Mike Porter acknowledges that fear can be real when encountering a slithering sack of venom on a tromp in the woods this spring.

A senior wildlife and fisheries consultant at Noble Research Institute in Ardmore, Porter spends much of his time admiring and learning about the 46 types of snakes in Oklahoma, especially the seven that are poisonous. He “loves just watching them [because] all snakes do a lot of good. They all have an ecological purpose.”

Porter understands that some can get the heebie-jeebies because “people are either fascinated by snakes or scared of them. There tends to be no in-between.”

He encourages people to learn about the poisonous snakes “because the more education they have, the less fear they have.”

All of Oklahoma’s venomous snakes are pit vipers – the copperhead, the cottonmouth (or water moccasin), and five rattlesnakes (western diamondback, timber, prairie, western massasauga and western pygmy). Narrowing them down into those three groups may lessen apprehensions, Porter says.

Snakes are active in the spring after hibernation, because they’re hungry and the warm weather heats up their cold-blooded bodies.

“They’re all predators; none is a herbivore,” Porter says. “Some eat small things like termites; others eat bigger prey, like rabbits or fish.”

Some ferocious nonvenomous species, like the bullsnake and the rat snake, can perform some dirty work for humans.

“Rat snakes keep down rodents and bullsnakes are immune to pit viper venom, so they can eat poisonous snakes,” Porter says.

He advises that people use common sense when they are in the woods or other parts of snakes’ habitat.

“Watch where you put your hands and feet,” Porter says. “Don’t stick your hands in holes or under logs. Watch where you’re climbing. Remember that a snake can’t strike more than half its length, so that’s only about 4 feet at most in Oklahoma. Just give the snake a wide berth and don’t provoke it.”

Copperhead: Alternating, hourglass-shaped bands of darker and lighter copper, reddish-brown and pinkish colors; not a rattlesnake because it has no rattles

Cottonmouth: (or water moccasin) Black streak or mark on the side of the head from the eye to the corner of the mouth; more mass than nonvenomous water snakes and floats higher and holds head higher; also found up to a mile away from water

Western diamondback rattlesnake: May not always have rattles; varying colors with alternating dark and light bands on the tail and diamond shapes on the back

Prairie rattlesnake: A black band close to the rattle and light stripes down the side of the face

Western massasauga rattlesnake:  Gray with black spots and a red stripe running the length of the back, and rattles that sound like a mosquito

Western pygmy rattlesnake: A row of dark brown splotches running the length of the back with three smaller rows of lighter colored splotches along each side

A Canyon For All