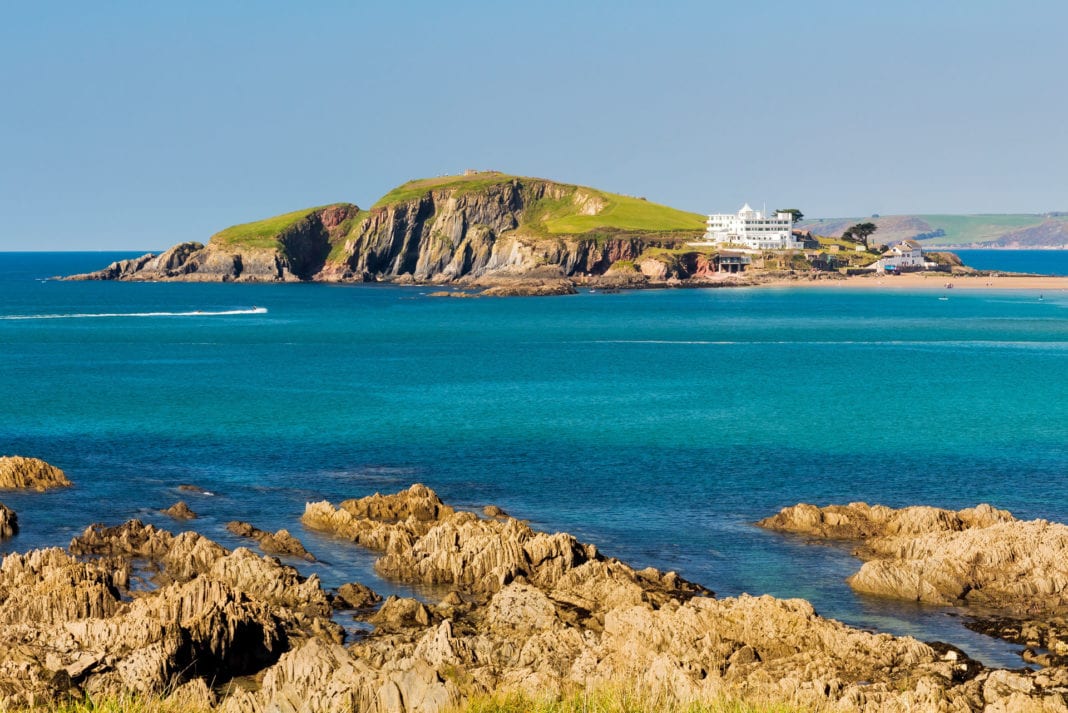 Step back in time with me. It’s the late ’30s. Mickey Mouse is about to battle an army of brooms carrying water buckets in Fantasia; Spencer Tracy and Bette Davis are luring us into “air-chilled” movie theaters; the number one song is Cole Porter’s “Begin the Beguine” by Artie Shaw; and Agatha Christie is writing Evil Under the Sun, a murder mystery featuring an engaging Belgian detective named Hercule Poirot, who finds himself on holiday at a secluded beach resort in Devon when mischief ensues.

The resort in question is, in fact, Burgh Island, off the United Kingdom coast along the English Channel. Specifically, the Burgh Island Hotel, the only thing on Burgh Island besides a pub. In 1929, Archibald Nettlefold, a filmmaker, bought the island and built a hotel in a full-throated salute to an exciting, new style that was becoming popular: Art Deco. Thankfully, the hotel has embraced it ever since.

To close the loop on the whole Poirot thing, the clincher is that Agatha Christie wrote Evil Under the Sun while staying on Burgh Island in a writer’s cabin she built for her personal use. It’s located below the hotel right on the water; it’s been updated and it’s rentable. Christie also wrote And Then There Were None in that cottage.

But back to our star, the hotel itself. Inside those doors, it’s the 1930s (with Wifi) and the illusion is complete. The staff is meticulous in their attention to detail, from the Burgh Island bespoke toiletries to the love and care given the hundreds of remarkable Art Deco pieces of furniture, light fixtures, fabric and artwork.

Each of the 25 rooms and suites bears the name of a long-time friend. There’s the Noel Coward Suite, the Josephine Baker Room, the Lord Louis Mountbatten Room and the Bentley Room, named after W. O. Bentley, who in 1920 designed and built the revolutionary Bentley 3 Litre automobile. Monsieur Nettlefold owned three.

Dinner in the Grand Ballroom is always a dress up affair – dress up as in black ties and evening dresses. But it’s worth it. The dinners are fabulous, matched only by the free-flowing Art Deco ambiance that permeates the exquisite ballroom itself.

Prefer to not dress up? No worries, the hotel’s Nettlefold is a very fine seafood restaurant whose maritime connection extends into an area they call the Captain’s Cabin. Because that’s what it is – the actual captain’s cabin from the HMS Ganges, a warship built in 1821.

Meanwhile, in the hotel’s fabled Palm Court, the peacock domed glass ceiling, velvet furniture and elegant stylings of the 1930s makes you feel like Jean Harlow or Clark Gable as you enter. The lounge is a sedate tea room by day and a full-service cocktail bar at night. Jazz musicians and dance bands perform weekly, and murder mystery weekends are held regularly.

If you feel like exploring, there are good walking trails. Ruins of a small chapel are up at the top of the hill. It’s thought it was also used as a huer’s hut, from which watchmen would raise a “hue and cry” when they saw shoals of pilchard fish. The pub the fishermen frequented, the Pilchard Inn, is still there. They’ve been serving up good food and drink since 1336. Yes – 1336.

Burgh is a tidal island, which means it’s really only a part-time island. At low tide, it’s not an island at all. You can walk to it. But at high tide, when the causeway is submerged, the hotel calls out their one-of-a-kind raised-platform Sea Tractor to ferry guests to and from the mainland, 270 yards away.

Sweet Nile of Mine

The One and Only