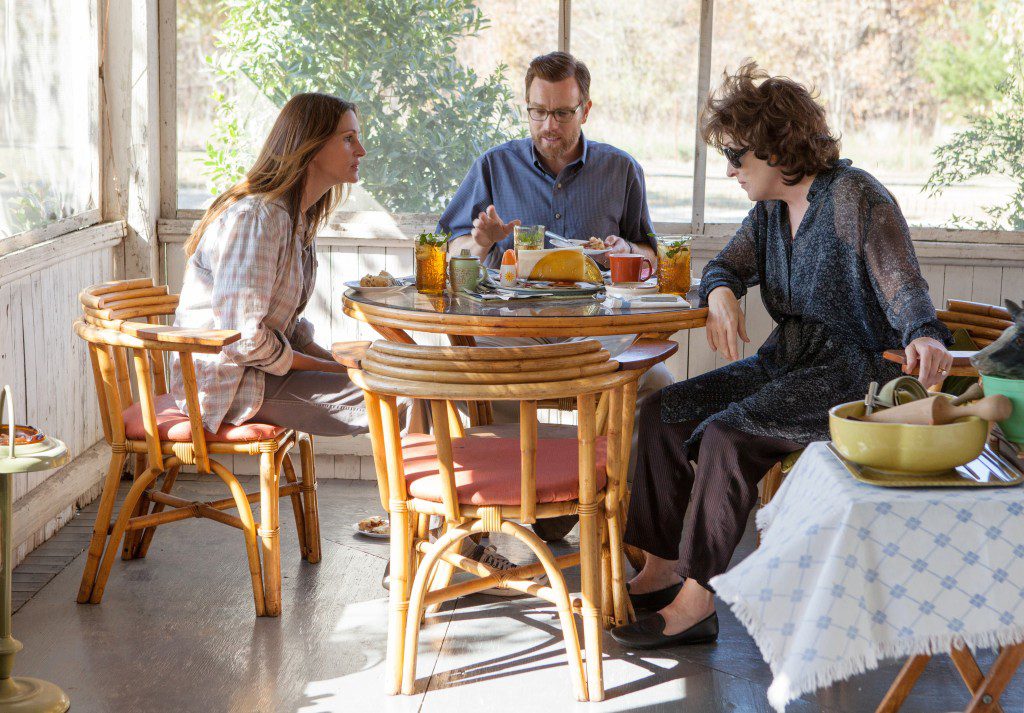 Welcome to the film set of August: Osage County, which was shot in the northeast part of the state during summer and fall of 2012. The movie is based on the acerbic-yet-emotive play of the same name and chronicles the bittersweet lives of the Weston family. Oklahoma playwright Tracy Letts garnered the 2008 Pulitzer Prize in Drama for his script, and together with director John Wells, helped bring the film version to life, as well.
Jill Simpson, director of the Oklahoma Music and Film Office, was one of the most passionate advocates for August: Osage County to be filmed on the author’s home turf.

“When I heard that the Weinstein Company had optioned the movie rights to the play back in 2009, I made it my goal to connect with the playwright, Tracy Letts, to make the case for filming in Oklahoma,” Simpson says.

Over the next couple of years as the project developed, Simpson stayed in continuous touch with her contact at the Weinstein Company, keeping tabs on the status of the production. She then flew to Burbank, Calif., to pitch to Wells and his team that they should film in Oklahoma.

“All the while, Harvey Weinstein was interested in filming in Georgia due to their strong incentives program, large crew base and well-developed infrastructure for the film industry,” Simpson says. “Georgia had even submitted a house that he was very high on. We had our work cut out for us.”

But Simpson and her Oklahoma cohorts also had found a stunning house to use as the central focus of the film’s action: the landmark Boulanger House near Pawhuska. When Wells and his crew at last came to scout Oklahoma locations in April 2012, Simpson says, “They fell in love with many of the locations we presented in the Bartlesville and Pawhuska areas along with the Boulanger House, which happened to be on the market.”

The cast and crew made their home base in the nearby town of Bartlesville, where the citizens were no strangers to a large film production. Shortly before Wells and his crew came to shoot August: Osage County, filmmaker Terrence Malick had come to film To The Wonder, starring Ben Affleck and Javier Bardem.

“It helped that we had already been through it recently,” says Maria Gus, executive director of the Bartlesville Convention and Visitors Bureau. “At least the idea wasn’t completely foreign to them. I think the community felt as if we had another opportunity to show our hospitality, and we must have done something right the last time. Of course there were those that had a hard time controlling their excitement, but overall everyone was great. Our community was professional, friendly and definitely knew when to help the cast and crew let their hair down.”

Gus says that during the filming, which began setting up in July 2012 and lasted until November of that year, the film brought a definite boom to the local economy.

“There was a significant impact on local business,” she says. “Not only did the cast and crew need expected goods and services, but also anything else a large group would need while away on a business trip. Obviously, hotel rooms were a necessity, but also local catering for parties, medical care, entertainment and grocery shopping … In addition, the locals were out and about a lot more often. Some may have been hoping for a celebrity sighting, and many others were just eager to get out in the community and talk about the excitement. Overall, I think it was a very positive experience for the businesses in Bartlesville. The electricity was contagious for the community.”

Talmadge Powell, founder of Talmadge Powell Creative, was the force behind the film’s official wrap party in downtown Bartlesville. Powell says that utilizing local goods and businesses was important to achieve the Oklahoma feel of the party.

“We capitalized on local flavor and food,” Powell says. “They really wanted us to take advantage of all the Oklahoma kinds of things. We had stations with Oklahoma comfort food and live entertainment. We transformed the place into an Oklahoma autumn feel, bringing in trees and shrubs and dark woods. Chef Justin Thompson was the caterer for the party. We went to local stores and purchased Oklahoma props and things that would relate to the actual time period of the movie and also who we are as Oklahomans.”
“Make no mistake: Having a large production in your community is work,” Gus says of the entire experience. “The cast and crew work long days and are focused on getting a lot of work done in a short amount of time. But at the same time, if the community and the production have a good way to communicate and a team of people working together to make sure needs are met and the public is informed, the whole experience can be a fantastic success.”

“The August: Osage County production team was top notch,” Simpson says. “Not only were they talented, they were lovely to work with. Most importantly, they were mindful of our locals and our culture, and took great care of our Oklahoma crew. They left our filming locations in as good, if not better, shape as when they arrived. That is a testament to their professionalism. I would welcome any of this team back to Oklahoma any time.”

Women in the Workforce

From Fireworks to Desperation