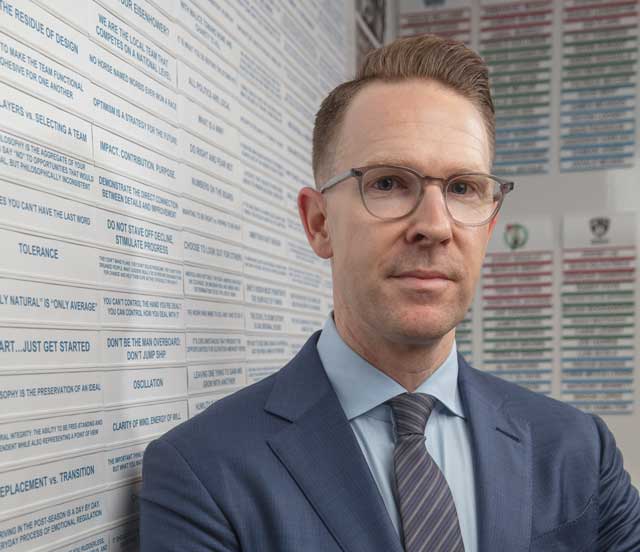 [dropcap]Humility[/dropcap] links our selections for Oklahomans of the Year. From the ringmaster of counterculture (Leon Russell) and the man running the state’s only major sports franchise (Sam Presti) to the chief of a tribe literally and figuratively reclaiming its culture (Geoffrey Standing Bear) and one of the world’s preeminent researchers on autoimmune disease (Judith James), each has given up the limelight to support others and make them better.

Taking One for the Team

Sam Presti’s career and life have always been about putting others ahead of himself.

Active involvement in the community is not a showpiece for Sam Presti. It’s about values. It surpasses the self. It’s instinctual, virtually genetic.

As a literal illustration, Presti, general manager of the Oklahoma City Thunder, recalls a favorite photograph: his 85-year-old grandmother protesting the closure of a library near her house. She “belonged to every board, committee and cause there was,” he says.

A few swatches of Presti’s social fabric include funding scholarships for inner-city youth in Boston, shepherding the Forward Thinking Leadership Program in Oklahoma City, linking the Thunder with the Oklahoma City National Memorial and Museum and supporting the Oklahoma Center for Community and Justice. He does so with a desire to remain in the background.

“Sam is a terrific guy! And he’s extremely humble on top of that,” says Moises Echeverria, OCCJ’s president and chief executive officer. His group named Presti its Humanitarian of the Year in September.

Putting others before self is second nature to Presti. In addition to his grandmother, his “grandfather was very focused on philanthropy and community, helping your fellow man was a common refrain I heard a lot,” he says.

“People are untapped possibilities of potential, and the more eclectic, diverse and intersectional groups and teams can be, the better for progress, learning and ideas,” he says. “We often look at diversity as a destination or a box to be checked when it’s really a starting point or, better yet, a launching pad. Diversity is an alternate definition for progress.”

Presti, 40, credits others for developing his social consciousness. At Concord-Carlisle Regional High School outside Boston, basketball teammates Keenan Smith, Anthony Halls and Mike Johnson “had a profound impact on me in terms of diversity, acceptance, self-reflection and not being afraid to open up on these issues,” he says. “Sometimes people don’t talk out of fear of saying the wrong thing. … Keenan, Anthony and Mike took that concern off the table for me, and I’m grateful for that. ‎People I work with today still do that for me; they allow me to seek to understand things I could never know. … That creates the setting for honest conversation and, most importantly, empathy.”

Presti, an Emerson College graduate with a bachelor’s degree in communications, politics and law, started three years for the Division III Lions. Captain his junior and senior years, he switched roles because better players joined the team and went from leading scorer to “the guy making the extra pass or making a defensive play,” he says.

Away from basketball and studies, Presti volunteered as an assistant coach at his old high school and raised money for Boston Children’s Hospital by producing three CDs featuring funk, jazz and hip-hop musicians from around the city.

“Without being a part of the community, you are denying yourself a right to experience a well-lived life,” he says. “We as people have to be present and aware of our own selves to see the opportunities all around us to serve.”

“Sam has demonstrated a level of leadership which ought to be duplicated not just within the NBA, but in businesses and organizations in our state,” he says. “The Thunder has one of the only women in the NBA to have responsibilities of the collective bargaining agreement, and she is a young African-American woman at that.”

Mandy Winton, OCCJ’s director of fund development, adds, “He recognizes the … significance of these intentional choices because they improve the outcomes for the organization.”

From Fireworks to Desperation