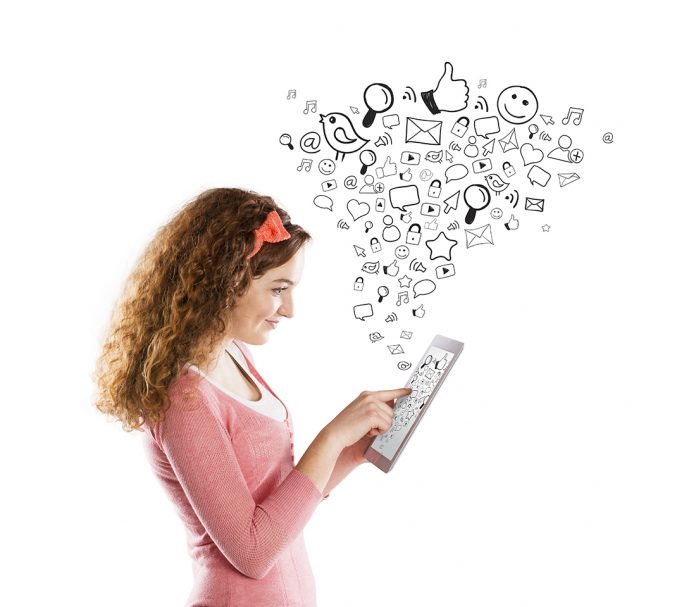 Whether social media and excessive screen time create mental illness is murky. Many factors contribute to poor mental health, and researchers at the Laureate Institute for Brain Research in Tulsa aim to find answers.

The Adolescent Brain Cognitive Development study, started in 2016, observes how the brains of 10,000 children, ages 9-11, develop over the next 10 years.  Florence Breslin, co-investigator of the study, says there are no cut-and-dry answers.

“The story is a lot messier than we think it is,” she says. “Studies like [this], where we can watch kids over time and see how they’re changing, see how their screen activity differs, will give us more answers.”

Breslin says research suggests that social media adversely affects mental health, but it’s akin to a chicken-and-egg scenario; it’s undecided if people with mental illness use social media because of their problems or if social media causes disorders like anxiety and depression.

News media have raised this topic for some time, but the scientific community has just started to research it.

“In the next year or two, we’ll see a real shift in our scientific knowledge of it, but right now we’re early,” Breslin says. “We know almost no causality.”

“It’s not all bad and not all good,” she says. “There are going to be positive and negative effects for everyone … whether it’s how they use [social media] or how much they use it, or if there are underlining pathologies that may be acerbated or surface because of usage.”

The perils associated with social media and screen time drive the research. Data doesn’t fully support the idea that abundant use of social media causes suicide or other issues, but a possible link pushes specialists to investigate.

A happy medium with social media may be discovered with continued research. Breslin reminds that social media can have a positive influence if used the right way, such as a person connecting with family and friends across the world or having access to and virtual meetings with support groups.

Data integrity and accuracy are challenges in any study. Breslin says Laureate researchers find the middle ground between getting the best data and respecting the privacy of those studied.

“There are researchers – [the Laureate study] is not one of them – that will pull every single text, get transcriptions and identify information,” she says. “There are ethical questions with it, like … what if someone talks about committing a crime? What do you do with that information? Research data is typically protected, so where is that balance? You have to find where the need for information meets the need of being so involved in the research subjects’ lives that nothing they do is private.”

Screen monitoring, which lets people check how much time they spend on their smartphones, could help researchers. Part of a phone’s operating system, it is less invasive on people’s privacy, but collecting research data from it is a challenge.

“Whatever we do has to be able to go across platforms,” Breslin says. “We have to figure out the best way to access the information and how we will deal with it. Maybe in small studies, we take a screenshot … and enter the data into a database. But when you have 12,000 children, that’s not an undertaking that is possible. So then we have to look at software.”

Researchers agree that more studies need to confirm whether social media and screen time impact the next generation. Since the Laureate group is among the first generation of people who don’t know life without hand-held devices, the results, as these children enter adulthood, could differ from the adult research available today.

“There are a lot of changes going on,” Breslin says. “The [Laureate] group … is coming up in a different world. So we may see that the data changes with this group because it has been a factor in their life from birth.”