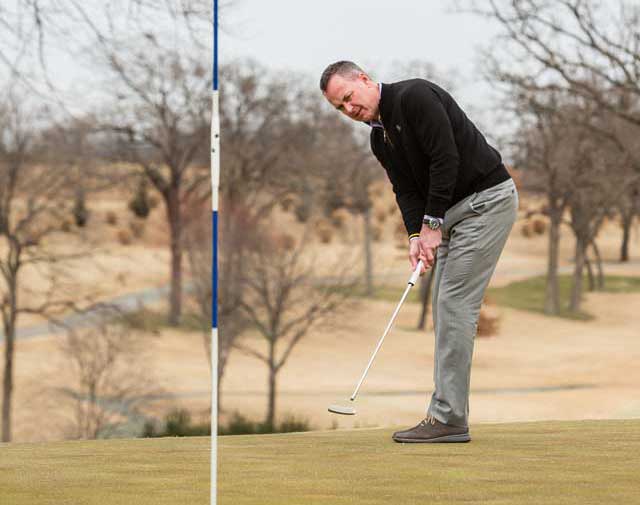 [dropcap]Cary[/dropcap] Cozby, director of golf at Southern Hills Country Club in Tulsa, is grateful to have won a top award in his profession, but service to others is what drives his way through fairways and life itself.

Cozby became the 63rd recipient of the PGA Golf Professional of the Year Award in November. Considered by many as the most prestigious honor from the Professional Golfers’ Association, the award is sought by hundreds in the sport, but Cozby’s esteemed resume and hard work secured him the distinction.

Regardless of the awards and recognition, Cozby’s passion lies in helping others. A survivor of colon cancer, he cites his work in the Swingin’ Fore a Coz golf marathon as his crowning achievement. The event ran for the last 10 of the 15 years that Cozby was at Wichita (Kansas) Country Club and earned $750,000. All of the money went straight to Victory in the Valley, a nonprofit organization helping those suffering from cancer and their caregivers.

The charity paid for transportation and lodging for those affected by cancer, and even bought two cars for those who did not have reliable sources of transportation. Cozby says proceeds were used solely for helping others.

“The money went straight to the people who needed it most,” he says. “That’s why I think we were successful.”

But Cozby’s work isn’t done; he wants to start another charity golf marathon in or around Tulsa or other parts of Green Country. Participants in golf marathons play from dawn until dusk as quickly as possible, with sponsors contributing money for each hole played.

[pullquote]“Growing up with the PGA, you meet a lot of the people who hold the title, and it’s a great honor.”[/pullquote] Cozby’s family is deeply rooted in golf, as his brothers and father have also held positions in the PGA. Cozby’s father, Jerry Cozby, won the PGA Golf Professional of the Year Award in 1985, making them the only father-son duo to hold this highly respected title.

“It’s cool to share something like this with your dad,” Cozby says. “Growing up with the PGA, you meet a lot of the people who hold the title, and it’s a great honor.”

Noting who has inspired him, Cozby says his father provided him with the business sense to succeed, while his mother mentored him and his brothers on being successful and happy in life. He and his brothers grew up in the world of golf and played for the University of Oklahoma before pursuing careers in the sport after graduating. Golf taught them how to be patient and to swing for their goals, he says.

Cozby, who became the Southern Hills club professional a litte more than two years ago after being head pro at Wichita Country Club, wants to stay on for 25 years. He also sees the legacy of Southern Hills as a “welcoming, relaxing and genuine” oasis from the day-to-day struggles of life.

“Whenever you drive up that long road for the first time in the spring or fall, it just takes your breath away,” he says, “I alway want to preserve that feeling.”

Cemeteries Are for the Living