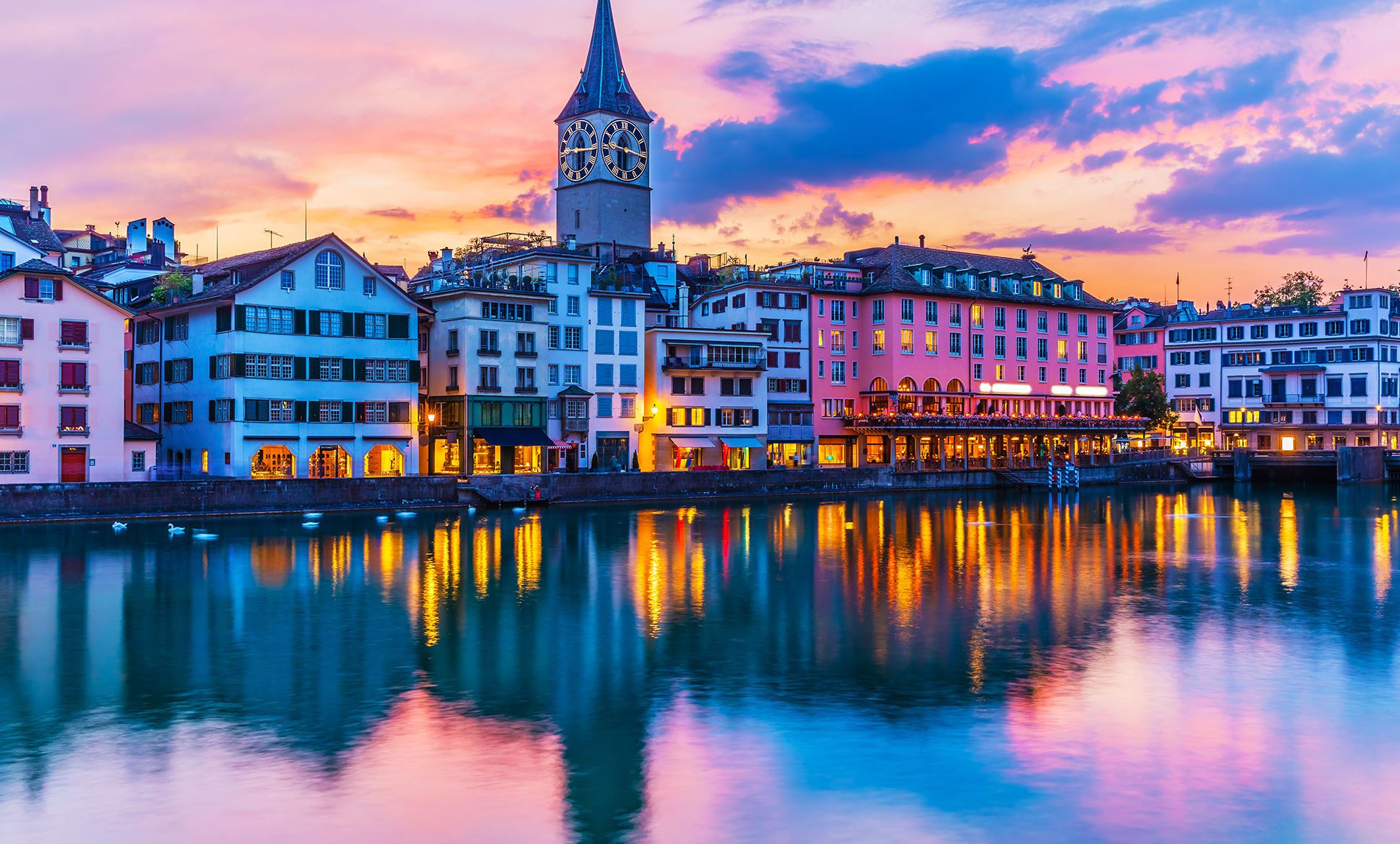 Zurich swings to a different rhythm than most big European cities. It’s a more sophisticated beat, reflecting the city’s role as not only Switzerland’s largest city (population of 1.4 mil) but also the hub of the nation’s staid financial and unexpectedly robust artistic lives. The city of gnomes (as Brits used to call Swiss bankers) is a clean, glittering, cosmopolitan gem on the threshold of the Swiss Alps.

Thankfully, the area surrounding the convergence of Lake Zurich and the Limmat River is easily walked, and attractions are close to each other. Navigate the cobblestone streets of Zurich’s Old Town, visit historic churches and art museums and do some high-end shopping. Make sure to leave time to unwind along the lake.

Start on the river at the intriguing Grossmunster (large cathedral), whose salt-and-pepper-shaker twin towers are probably the most recognizable landmark in Zurich. Legend has it the church was founded by Charlemagne after his horse stopped and kneeled on the forgotten tombs of Zurich’s patron saints, Felix and Regula.

Across the Limmat, the Fraumunster (women’s church) and its slender blue spire is visible for miles. The former Benedictine abbey was the seat of political power in Zurich for many centuries. Showstoppers include the magnificent stained glass creations of Augusto Giacometti (who also has pieces in the Grossmunster) and Marc Chagall.

One of the most exclusive shopping districts in the world is the Bahnhofstrasse, running from the bahnhof (train station) where the high-end brands dwell, south a little less than a mile to Lake Zurich, home of truly extravagant luxury shops. Pause to peruse the fine chocolate, designer clothing, time pieces and writing pencils. Nearby, ShopVille is a large, underground complex of 180 stores beneath and in the bahnhof, and they’re open every day.

The historic center of Zurich is a public hill called Lindenhof on the west bank of the Limmat River. The elevation provides some great views, including of Old Town and Niederdorfstrasse, a chameleon of a street that, during the day, is all about shops and quaint cafes, but at night, becomes a bastion of bars and outdoor restaurants.

Looking for something livelier? Zurich West is the city’s old warehouse district but has become the city’s new heartbeat, with lots happening in art and design in an environment surrounded by urban gardens, trendy boutiques, second-hand stores, street musicians and a fabulous culinary scene. Around the corner, a curious collection of shops, bars and restaurants has been built into the arches of an old railway viaduct. In fact, it’s called Viadukt.

Zurich’s backyard Swiss Alps mountain, the Uetliberg, is not only decorative, it’s also accessible and open for hiking, biking, snowshoeing and sledding. Grab the train at the bahnhof, or take a deep breath and hoof it up. A lookout tower sits at the summit.

Once you descend, head over to Lake Zurich and its many parks and gardens. Jog or go for swim if it’s hot enough, or take a boat cruise. The water is, as you might guess, very clean. And it’s also fun to go to a badi (swim area) on the Limmat. Swimming the river is not only permitted, it’s encouraged.

Plan to be in Zurich in August for the Street Parade, a million people and 200 DJs celebrating techno and house music on multiple stages all day.

Stay at the Widder Hotel just off the Bahnhofstrasse in Old Town, a beautifully-renovated chain of nine historic buildings blended into each other to create 49 uniquely chic rooms and a marvelous restaurant.