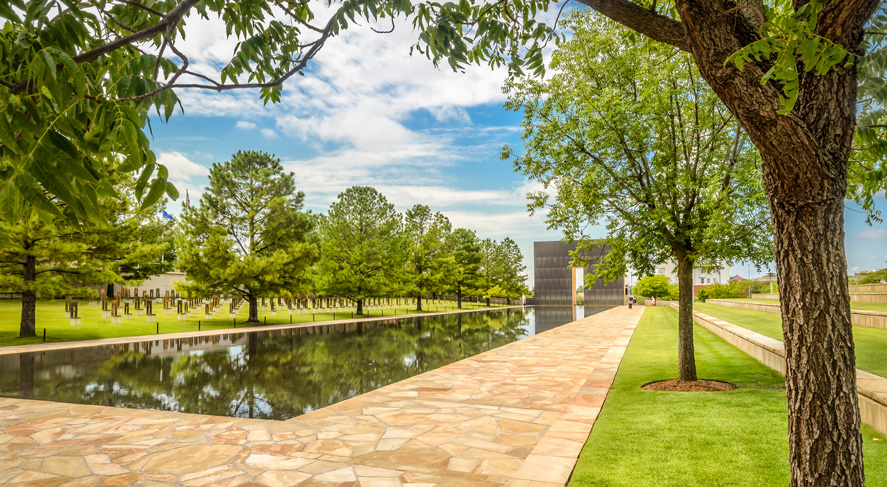 This story was originally published in the April 2015 issue of Oklahoma Magazine.

On April 19, 1995, at 9:02 a.m., Oklahoma City was forever changed when a bomb exploded in the Alfred P. Murrah Federal Building downtown. The north side of the building was completely destroyed, and 168 people were killed.

With the tragedy, the state capital became the center of worldwide news, and according to first responders, leaders and survivors, Oklahoma City stepped up to the plate and made its citizens proud. On this 20th anniversary of the event, we honor memories, pay tribute to those who lost their lives and remember to keep hope alive.

[pullquote]Be the Victim or Go Forward.”[/pullquote]At the time of the bombing, Susan Winchester was at Leadership Oklahoma, about five blocks south of the Murrah building. She says that being a child of the 1950s and ‘60s, she thought at first that the blast had been a sonic boom. Rumors circulated that the courthouse had been bombed before her office found out the correct location.

“My sister had just started working in the Murrah building,” Winchester says. “I called, and the phone actually rang, but of course, no one answered. I called my husband and told him I was okay. Then I called my brother-in-law to check on my sister, and he told me that she had been on her way to Stillwater for a presentation that day, so we thought she was far from the scene.”

But then at around noon, Winchester’s sister, veterinarian Dr. Peggy Clark, did not show up at her presentation in Stillwater, and her family began to get anxious.

“But, we also thought that if she had heard about what happened, she would be there trying to help, because that’s the kind of person she was. We became more and more worried when it became the time she should have been home from work and she didn’t show up. Then we really started panicking about what might or might not have happened,” Winchester recalls.

In what Winchester calls a “long reveal,” her sister was one of the last bodies recovered from the building. She had stopped by her office before heading to Stillwater.

“A loss in the family is a huge loss no matter how it happens, and there is so much emotion there,” Winchester says. “She had three little girls, but now the girls have all grown up and accomplished so much. One of them even followed in the steps of her mother and now has the same position. I had the opportunity to be the victim or to go forward and be strong and make a difference.”

Winchester served as a member of the Oklahoma House of Representatives from 1998 to 2008. Today, she is the chairwoman of the Foundation Executive Committee for the Oklahoma City National Memorial & Museum. She describes a movement called the Oklahoma Standard, which the group will implement in April.

“The Oklahoma Standard is free, easy, simple, and it’s something everyone can participate in. The idea is that in the month of April, everyone should do three things: an act of kindness, such as taking the newspaper to the front door of an elderly neighbor; an act of service, such as a volunteer opportunity; and an act of honor, such as remembering someone lost in the tragedy, participating in the marathon or visiting the museum,” Winchester says.