Books, videos and lectures on blacksmithing can only go so far. Those practicing this ancient, sophisticated, highly technical craft say you have to learn by doing.

“Don’t be shy; get involved,” says Byron Doner, an officer with the Saltfork Craftsmen Artist Blacksmith Association. “You sure will learn faster.” 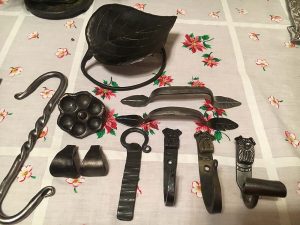 The nonprofit educational organization, which promotes this fiery mixture of art and trade, has monthly meetings and workshops throughout the state.

“The group was formed in 1996 by a small group of enthusiasts who wanted to get together to learn more and keep the craft alive,” says Russell Bartling, editor of the association’s newsletter.

The group has had nearly 700 members, with a stable membership level of around 400.

Blacksmiths are some of the world’s oldest artisans; the craft developed 3,500 years ago in what is now Syria.

“We basically get metal hot and manipulate it to different shapes, which are usually limited only by imagination and skill level,” Bartling says. “I first became interested in taking my forging skills to a higher level after attending my first Saltfork Annual Conference.

“It was there that I saw a nationally well-known blacksmith, Bob Patrick, move metal in ways that seemed magical to me. To say I was inspired was an understatement. That really was what lit the fire for me to pursue more education and practice.”

“I found that I learned a lot more from watching someone forging in person than I had from watching the videos I’d rented,” he says. “One thing I’d like to say about going to these meetings is don’t be like I was. I’d gather my stuff and go to the meetings but would usually get there after everyone was already forging.”

The Saltfork Conference, held each fall, is a great way to get a first-hand demonstration from some of the best blacksmiths in the world, Bartling says.

“We usually have two different demonstrators over a weekend and then follow that with the chance to attend workshops with those demonstrators after the conference,” he says. “It is a great way to make quantum leaps in forging skills and is just plain fun.”

The association also hosts workshops in Tulsa and Elk City. Visit saltforkcraftsmen.org for a schedule.

“For the folks that want to start forging, I say go to all the meetings you can,” Doner says. “Also, I tell newbies to watch everyone because they might just do something that you have heard wasn’t possible.”

“Many of us have worked with metal all our lives, since we were very young,” he says. “Often, that involved heating metal and working it on a very basic level to repair farm equipment, vehicles, make stair rails, et cetera.

“However, once you really catch the blacksmithing bug, a whole new world opens up and you realize that it would take more than one lifetime to fully develop all skills to take this craft to its highest levels.”

Caring for Your Animals