“It took about six months of watching our puppy, Desi, destroy stuff with her tail before it hit me,” Nyikos says of the impetus for Waggers. “[The idea] was just like lightning striking.”[pullquote]“Poetry was always something I did in my free time, but when you’re writing a dissertation, you don’t have much of that.”[/pullquote]

Waggers tells the tale of a lovable and excitable dog whose wagging tail constantly gets in the way. It is the Bixby author’s seventh book and her sixth illustrated children’s book.

She says she’s always loved writing and looked for creative outlets even in her academic studies at the University of Virginia.

“Poetry was always something I did in my free time, but when you’re writing a dissertation, you don’t have much of that,” Nyikos says. “It wasn’t until after I finished my Ph.D. that I started writing poetry for kids, and then that just turned into something bigger.”

Her first book, Squirt, was published in 2005 and tells the story of a squid who loses his imagination. Squirt was followed in 2006 by Shelby, a shy lemon shark, and by Dizzy, about the world’s fastest dolphin, in 2007.

After the publication of Dizzy, Nyikos realized she had a second career on her hands. She eventually had to choose between life in academia at the University of Oklahoma or writing children’s books full time. 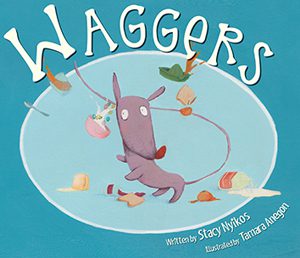 “My fourth book (Dragon Wishes, her first young adult novel) was coming out, and I was doing a bunch of traveling,” Nyikos says. “It’s really hard to be doing that and be in my office at a university. It wasn’t an easy decision, especially after all the years of training to be an academic. But this was the thing that puts a little spring in my step in the morning.”

She knows she’s found something special, and with two books already out this year – Waggers and Toby, a story of a sea turtle’s journey to the ocean – she’s found a formula that works.

“The world [of children’s books] is such a magical and new and shiny experience in the eyes of a child, and I love being in that kind of world,” Nyikos says.

In It For the Long Haul

Where There’s Wheat, There’s a Way